Our 2Wire connection is designed to be used with any wire that you have laying around (scab wire, multiple conductor, stranded, etc), 2Wire and wireless can be used at the same time as a failsafe, but not necessary. On our modules, you will see 2Wire connectors that can be either inputs or outputs on the 2Wire network. Please reference the below graphic and our manual on the proper way to use our 2Wire connectors.

The max distance between mods while using 2Wire is up to 1,219, however we recommend keeping the distance at 610 meters. 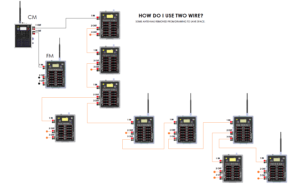 What should the distance be between Firing Modules?

We recommend 300-500 feet from mod to mod and elevating them off of the ground, this will dramatically help the radio quality. You can increase the distance by keeping an eye on the link quality between mods.

An additional feature on the Firing mods (FM) is Repeater Mode providing maximum wireless signal strength and more robust timing of the firing signals when you need to go even farther wirelessly. While some systems claim 1.5km ranges, that is in best case scenarios; pyro is seldom fired in best case scenarios.

What distance should there be between repeaters?

If the link quality (LQ) on the mods falls to about 40%, then you will need to add a repeater mod. But you’ll want to use as few as possible as each one you add increases the bandwidth usage.

How do I know what radio frequency (RF) channel I should use for my show?

We always recommend using the Wireless Wizard (WW) function to automatically determine what radio frequency will work best in your area.

How do I manually change the radio frequency (RF)?

With all mods check which RF they are on, if the firing modules do not match the command module (CM) you can change this manually. On the CM Press [Menu] > 2 on the numpad + ENTER. The Graphical User Interface displays which RF channel is best in your area.

To change the RF channel on all of your firing modules follow these steps:

FM [MENU] > Press [NO ⬇️] and navigate to RF Channel > with the [YES ⬆️] and [NO ⬇️] change the RF channel to match the Command Module’s RF channel and press ENTER.

How can I check which software (SW) version my system has?

Turn on mods and press the [No ⬇️ ] – you’ll then see which SW version your mods are.

How do I update the software and how often does it get updated?

If updating both Command and Firing Modules, please make sure to update your Firing Modules before running the Command Module update.

Software is updated whenever enough small improvements have been accumulated for release, or a major improvement/fix has been added. There is no set schedule for when or how often an update occurs. If you purchased Firelinx through its website or directly from a sales agent, you will be notified via email when a new software update is available. Additionally, if an update is available, it will be listed on the website under the SUPPORT page with notes regarding what improvements have been made.

To update the Firing Modules (FM), place the update file on a USB stick and insert it into the Command Module (CM). Turn on the CM and all FMs. Make sure all FMs have joined successfully. FMs should have a full battery prior to performing an update, or be plugged in to their charger. On the CM [MENU] > Press [7 Update] on the numpad and press ENTER. The CM will search the USB drive for the update. It will then prompt and inform the user of which update, if any, will be applied, with a Yes/No question. Pressing [YES] will begin the update procedure. During the procedure, do NOT turn off the CM or the FMs during the process. When completed, the FMs will turn off automatically, and the CM will return to the Menu. The procedure can take anywhere from 5-10 minutes depending on the number of FMs connected.

The CM update is performed the same way and it should be completed in under a minute. The CM should always be updated AFTER you have updated the FMs and OPNs.

Updating OPN cards is the same procedure as the FMs, though it can take between 10-20 minutes to complete. If, after an OPN update has occurred, the unit still shows 100% completed without continuing, wait approximately 30 seconds before shutting off the unit (after it reaches 100%).

It is recommended to reboot the CM (power off then power on) between each update to ensure the information it has regarding the FMs is accurate at the time the update is initiated.

If I have multiple types of updates to do, is there a specific order?

If you need to do multiple updates, the proper order is OPN, then FM, then CM. Be aware, if there is an OPN update for an FM, and the CM has the same OPN that needs the update, the FMs will be done first. You’ll need to do the update procedure again to update the CM’s OPN card.

Can I shoot a scripted show and manual show simultaneously?

Yes! If you have a show you know you’d like to script out, but there’s a few shots you’d love to time for yourself you can do it! All that is needed is to script a show using on the modules and pins that you plan on having scripted. Then once you are armed you can start the scripted show, change over to the manual firing page and fire the other fireworks manually. You are also able to start on manual, go to internal or SMPTE and start that show and even go back to manual firing!

How many e-matches can be used per firing pin and should I connect in series vs. parallel?

We STRONGLY recommend only connecting one e-match per pin. You can connect up to three in series, but you run the risk of not firing all. If the first e-match fires first there’s no current running through the rest of the e-matches. Every 175 feet you can drop one e-match, the furthest distance is then dropping 2 e-matches worth of wire leaving one match to fire, equalling 350 feet. We highly recommend not pinning e-matches in series. 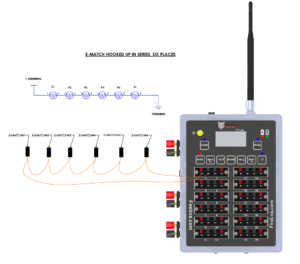 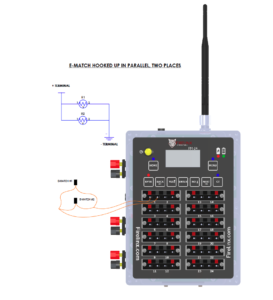 What kind of connection does Firelinx use?

Firelinx offers wireless and 2Wire connection from mod to mod. The mesh wireless system utilizes an encrypted 2.4 GHz wireless signal to communicate in conjunction with our proprietary algorithms. Firelinx can also be expanded to include Ethernet and other communication connections when needed.

What distance should there be between a Command and a Firing modules?

What is the battery life of the Command Module?

The Command Module comes with rechargeable LiPo batteries which run up to 30 hours.

What is the battery life of the Firing Module?

The Firing Module comes with rechargeable LiPo batteries which run up to 65 hours, with the ability of adding a second battery for twice the run time.

How many Firing Modules can I connect to my command module?

Up to 999 firing modules to one command module.

What kind of fireworks does Firelinx support?

Firelinx is designed to work with all types of fireworks, from Class-B professional grade fireworks to Class-C consumer grade (assuming the user knows how to wire an e-match to Visco). Whether it’s a 12” shell, cremora, or a cake, Firelinx can shoot it.

What do the different LED colors mean?

Magenta – Continuity test – one or more shots are detected

Yellow/Red flashing – System is either arming, or disarming.

After firing my show am I safe to approach the Firing Modules?

After firing your show, you should disarm the system by turning and pulling the key from the Firelinx Command Module. Once that step has taken place, and the modules turn green in the field, you are safe to approach the firing modules with caution. While the firing system will not fire any more, there is always the possibility of delayed explosions or duds on any firework. While Firelinx can provide the best safety in a firing system, this is no replacement for having knowledgeable pyrotechnicians and safety procedures in place to clear a field after a show.

Need more information? Get in touch with us

This website uses cookies to improve your experience while you navigate through the website. Out of these, the cookies that are categorized as necessary are stored on your browser as they are essential for the working of basic functionalities of the website. We also use third-party cookies that help us analyze and understand how you use this website. These cookies will be stored in your browser only with your consent. You also have the option to opt-out of these cookies. But opting out of some of these cookies may affect your browsing experience.
Necessary Always Enabled
Necessary cookies are absolutely essential for the website to function properly. These cookies ensure basic functionalities and security features of the website, anonymously.
Functional
Functional cookies help to perform certain functionalities like sharing the content of the website on social media platforms, collect feedbacks, and other third-party features.
Performance
Performance cookies are used to understand and analyze the key performance indexes of the website which helps in delivering a better user experience for the visitors.
Analytics
Analytical cookies are used to understand how visitors interact with the website. These cookies help provide information on metrics the number of visitors, bounce rate, traffic source, etc.
Advertisement
Advertisement cookies are used to provide visitors with relevant ads and marketing campaigns. These cookies track visitors across websites and collect information to provide customized ads.
Others
Other uncategorized cookies are those that are being analyzed and have not been classified into a category as yet.
SAVE & ACCEPT
Scroll to Top